So...the year is over, huh? Guess it's time for a recap of the longest/shortest year.

Well, first and foremost I'm not going to delve into too much detail about COVID and all that People are mostly sick hearing about it, and aside of a few personal experiences that changed over the year, I don't have much to add to the discussion anyway. I worked 3 full months in home office, which was a seamless transition due to our company already mandating a VPN setup for every employee into our local company network.

The very first thing that happened in 2020 was pretty much in the beginning of January, our company had a trip to Obergurgl in Austria for its 10th anniversary.

For people not knowing, Obergurgl is a rather expensive/chique ski resort, so we pretty much had an “all out” weeklong trip, and I'm pretty sure most of us won't forget that for quite a while. I personally didn't really ski there, but went tobogganing (sledding) instead, the destined area for that was a hell of a ride and I ended up being lucky not being bruised all over. The definitive highlight of the week was a seated VR Flight Simulator setup (using XPlane 11) that was up for one day.

One of the apprentices at our company actually cut together a short impression video, you can watch here.

I've been attending demoparties since 2018 (Revision 2018 was my first one!) and since I tried to at least attend Revision (Saarbrücken, Easter weekend) and Evoke (Cologne, in Summer) every year. This year was a bit different though, but instead of the event being cancelled, it was moved online using streams. Additionally, everything was made a bit more lively-er and fun with Sofa World, which pretty much is an virtual demo party space in which the creators rebuild the actual location in which players then can watch the streams on actual bigscreens! 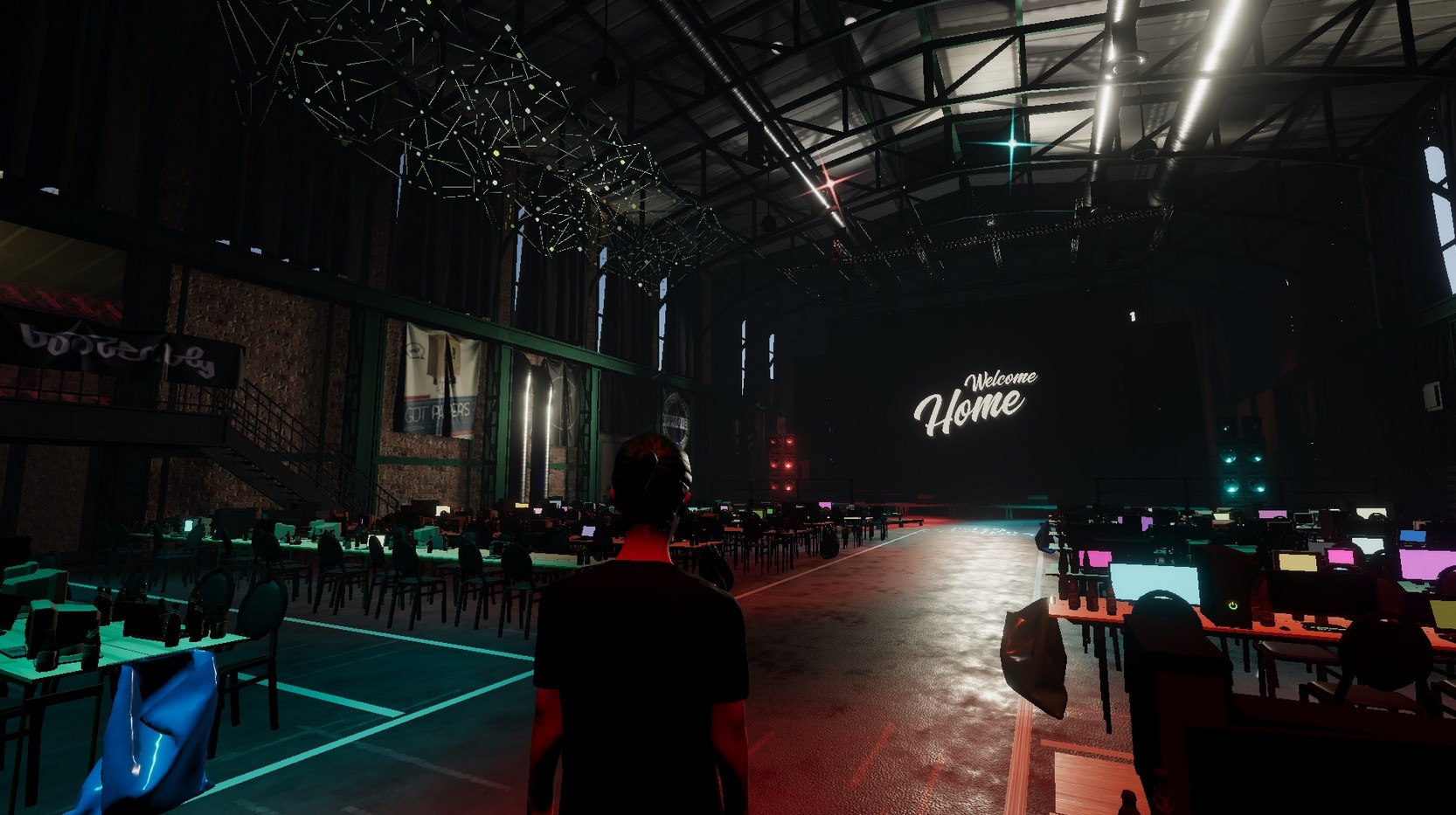 Picture of the E-Werk in Saarbrücken, inside Sofa World, courtesy of https://www.sofaworld.net/

I also attended both Outline and Nova, but really mostly spent my time in Sofa World finding easter eggs on the new maps.

Remember Retrospring? Me neither. Considering it ended in 2016, and we decided to bring it back on April Fools 2017 without any further support, after 3 years of doing nothing, we actually started working on things again a bit, at least slowly. Main issue is that we need to refactor our sins from 6 years ago, and that takes quite a while. The main achievements this year definitely were the addition of Two Factor Authentication and the whole frontend refactor.

Some before/after pictures I posted in tweets below:

Reworking the navigation for the Home Timeline, Public Timeline and Groups.

actually making Groups visible with some help text because there's surely some people that don't know Retrospring actually had groups all those years. pic.twitter.com/TiMwOm0uk3

Why? Because I can.

I'm not that super strong on “keeping my personal data safe”, but it's definitely something I've been thinking more about recently. So, at the end of last year I evaluated how much I actually use my Google account and...I barely used it at all.

So I decided to delete it. I'm now approaching one year without any personal Google account, and I absolutely don't miss it. My email always was managed externally, first on a server that I partially paid for and now I'm running a plan on Fastmail.

The really only thing I use on the regular from Google is YouTube, and aside of the videos that are marked as not suitable for young audiences, I still can watch everything on there just fine. For managing subscriptions, I even built a custom webapp that utilizes ancient YouTube RSS feeds!

One of my largest personal issues in the past few years has been productivity, or at least my perceived one. A lot of people probably know the feeling that they want to get stuff done and then just end up staring into their screens for the rest of the day/evening/etc. and I wanted to overcome that.

For that to work I started to use Todoist and fittingly enough found a productivity guide and quiz that led me into trying out a methodology fitting for myself: Getting Things Done (or GTD for short). I started shaping my Todoist to work that way and I've done so since September. It definitely has worked out for myself.

But another huge part in getting over this was figuring out that even if I perceived that I was unproductive, by the time I thought that I already did loads of things, and to-do lists helped to visualize that to me.

I want to talk more about this, but I will go more in-depth into how I'm handling all that stuff in a separate blog post in the future!

...Finally. I started it in 2018, and due to...probably just the paragraph above and me not managing my time properly, I lost track of it. So, in my 2 week vacation in September I finally got myself to finish it. I read the remaining 5 (out of 8) episodes in a span of 5 days, one episode per day, where the average reading length is at least 8-10 hours.

I was absolutely floored at the end of it, not just because these were super long nights, but also emotionally. I don't often want to claim something is “perfect”, but Umineko is so close to that, it's an experience I won't ever forget.

Additionally, a few months after finishing the VN/soundnovel, I also read the manga, which I finished just yesterday. It includes a bit more details in a few aspects and it visualizes a few scenes better due to the manga panels of course showing more than the few (but still numerous) CGs in the VN.

For the next year it's onwards to more 07th Expansion (most likely Higurashi) and other VNs!

I Organized an Online (Un)Conference

I did not just attend several online events and conferences this year, I actually helped out organizing one! TYPO3Camp Munich, which I usually attend to in person.

Over the course of two months I helped with several things, but my personal focus was finding the setup for the conference itself, considering the sheer amount of tools available nowadays. We opted for a conference room tool and Jitsi rooms at the side for more personal interactions. And it seemed people were getting used to it quite quickly. When the actual event happened at the end of September I also did moderation of some talks.

Being on the other side of conferences once was quite nice and I'll definitely help out the following years as well!

Did you know I have a Twitch channel? Now you do! In November my urge to go back to streaming finally grew big enough to actually do it, and so I did! I prepared some fancy new visuals, finally set up my Stream Deck among other things and I'm now streaming with a weekly schedule.

Currently streams are on hold until “the next year” because December turned out quite stressful at work and I couldn't get myself to stream much. But they'll be coming back in January for sure!

This probably summarizes most of the “larger “events”” this year...but wait, I'm not done yet!

I have an OC, and I love commissioning art of her, so that of course also happened this year, the only two art pieces coming forth this year were absolutely stunning though, check out the artists from the linked tweets!

the adorable Poly for @pixeldesu 💖 Thank you very much!! 👏 pic.twitter.com/f70KaCJu7r

Not just art in the traditional sense, but due to me going back to streaming and being an affiliate, I finally got myself emotes too!

After roughly a year of being affiliate I finally decided on emotes for my stream, that are available...now! These were drawn by the amazing @KageSatsuki!https://t.co/XBranYUb5A pic.twitter.com/W6RhN0acN2

There just were some things I enjoyed that I'll share with you, in a quick rundown:

There's probably a bunch of more stuff that I enjoyed throughout the year, but I'm pretty sure I must have posted about most of these things on Twitter/Mastodon anyway.

To end the whole post, I want to thank all the people that I talked to this year, my friends in general, and all the new friends I made! Sometime soon we'll be able to meet again in person, until then, chatting and talking will have to suffice!

Even if my year was pretty positive throughout, I'm sure it wasn't that good for many of you, remember that you have friends to reach out to that love you!