How I manage my Life and Productivity

I've wanted to write this blogpost for quite a while now, since October I believe. Finally got some time on my hands and feeling like writing after my year-in-review post, so here we go.

Not sure if people know, but I had a huge problem with productivity in general. I've been doing programming-related things for around 10 years now and with the improved skill came more ideas, more things I wanted to do and less time to do it. The issue here is that the ideas just pile up, and the more you end up feeling bad because the pile just doesn't grow smaller.

It got particularly bad over the years, and last year September I finally decided I needed to change something, and went back to my good old friend Todoist.

Even better, after initially setting up tasks again, I actually found their Productivity Methods page, including a quiz that I decided to take, which would eventually lead me to something that would help me manage stuff even better.

And that quiz told me that GTD, short for Gettings Things Done, was the method for me. How fitting!

Disclaimer: While I found that GTD works for me, it might not be your fit at all, or you won't like the planning effort going into it. If you are interested in things like this however, feel free to take the quiz on the aforementioned Productivity Methods page, there are more than a handful of different approaches you can take!

To quickly get into it a bit, GTD is a self-management/productivity workflow by David Allen. It consists of following steps:

It sounds like a lot of planning, but probably the hardest thing to initially do is the “great mind sweep”, where you need to get an initial drop of everything your brain holds on. GTD actually provides a trigger list for this, containing keywords that might bring things back to recent memory.

Okay, so now I have Todoist and GTD, but how exactly do you cleanly do the above? I'm using Todoist Premium, so added to the general projects, I also have access to labels for my tasks.

For everything that I want to do at some point, I have a label called “Someday/Maybe”. These pretty much are my unplanned tasks, and when I do my daily review and I'm in the mood, and have the time, I might pick a task and put it on my list for the day.

This label is pretty much my brain. As soon as I think of something I want to do, I put it on my list, and if it's not a task I need to do by a specific time, I slap this label onto it. 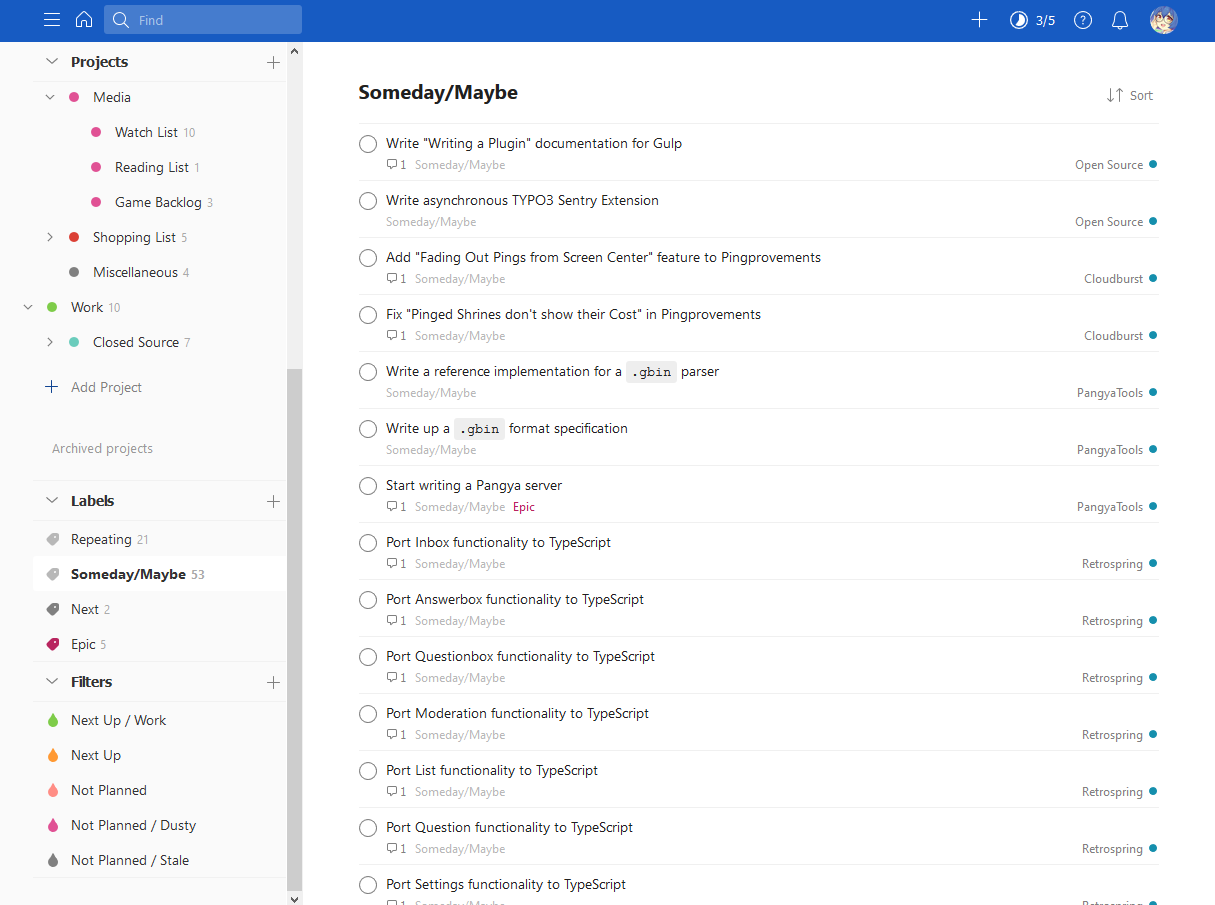 Next up, there is the label “Next”! These are tasks that are in close relation to another one, and I can safely determine that once I planned the other task, I need to do this one as well. As an example, when I start watching an anime and make tasks to watch the episodes, the single tasks don't become “Someday/Maybe” tasks, but rather “Next” ones. I prioritize these before pulling in something from the “Someday/Maybe” list.

I also have a label called “Repeating”. These are fixed tasks that don't require planning because they always have set dates, or timeframes where I need to do them. This includes things like taking out the trash for garbage disposal on time etc. pp.

This is also not really a GTD-related thing, but something I find personally interesting to look through.

The final label I have is called “Epic”. This actually isn't a GTD-specific thing, but something I got to add for myself. Sometimes I have things I want to do that include a lot of smaller subtasks following, so getting to the huge task is an “Epic”. Once that “Epic” has been crossed of, and I started doing that thing, I pretty much create a lot of following “Next” tasks for it.

These pretty much just consist of me looking at my “Today” view in Todoist, checking what tasks are up for the day. Depending on how much there is or how I'm feeling I then go through “Someday/Maybe” and pick some additional ones, trying not to overload myself of course.

For the Weekly Review on Mondays I do the same, but if possible I try to pick larger tasks like Epics and spread them across the week. The last epic I started was “Starting to watch Gatchaman Crowds insight”, which split into 12 tasks (for 12 episodes), which I spread over the week watching two episodes a day.

Verdict / Learnings from it

So, this has been my personal workflow for about 5 months now, and I'm quite satisfied with it so far, there's a few reasons for it.

The main one being that I got my brain to finally understand productivity right, and especially in the full scope for myself. My sense of productivity was for a long time getting the ideas in my brain done, but being able to look at the grand scale of things and seeing that all the time I've been working an 8-hour day job and did things there as well.

This also helped me getting back into enjoying entertainment media again. For a long time I actually internally kept myself from watching anime or gaming for too long because I felt like I needed to do something productive. Now somewhat having the days laid out, and more carefully assessing myself over the week I now more often make myself time to do the things I enjoy, aside of the cool programming projects and whatever there is.

As said earlier already, this might not be for everyone. I'm a person that you could regard as overthinking/overplanning, so the workflow I adopted kinda fits that as well.

In the end the thing that matters is that you find a workflow for yourself and that you try keeping at it. If stuff doesn't work out, adjust it, reiterate and talk about it!

How do you manage your life, if at all? You can always get into a conversation with me on Twitter or Mastodon, so feel free to chat with me about it, or give feedback about mine!